The Command Prompt has been around in Windows since Windows 95, and many users believed it would always be with us. However, in the Windows 10 Creators update, Microsoft finally replaced the Command Prompt with Windows PowerShell. This came as a bit of a shock to many users that still relied on the command prompt as part of their daily routine.

The Command Prompt is familiar to many users, and if you find the lack of it a bit of a shock, don’t worry. Believe it or not, it hasn’t gone completely away. Microsoft has only hidden it from you. Will they get rid of it completely? Perhaps. But for now, it has just been removed from the menu system and you can access it if you know what to do to make the most of it on your Windows laptop or PC.

Accessing the Command Prompt and Powershell

However, if you have the Windows 10 Creators update, now you will only see Windows PowerShell or Windows PowerShell (Admin) options. For many users, this can as a bit of a shock. This was especially true for those users that were comfortable with the Command Prompt but were a little hesitant about diving into PowerShell.

Differences Between Command Prompt and PowerShell

Before we look at how to restore it back to the menu so we can use it again, let’s first take a moment to examine the differences between PowerShell and Command Prompt.

The Command Prompt has been around a long time, since the early days of Windows. In fact, it’s actually based on DOS, the text-based operating system that pre-dates every single version of Windows. The commands are much the same, making it very familiar to many long-time Windows users around the world.

Because it has been around for so long, it is a popular choice for Windows users when they need a little text command love. But it’s also limited. There is only so much you can do with Command Prompt compared to PowerShell, but it’s also not as complicated to learn. For many users, it is all they will ever need. 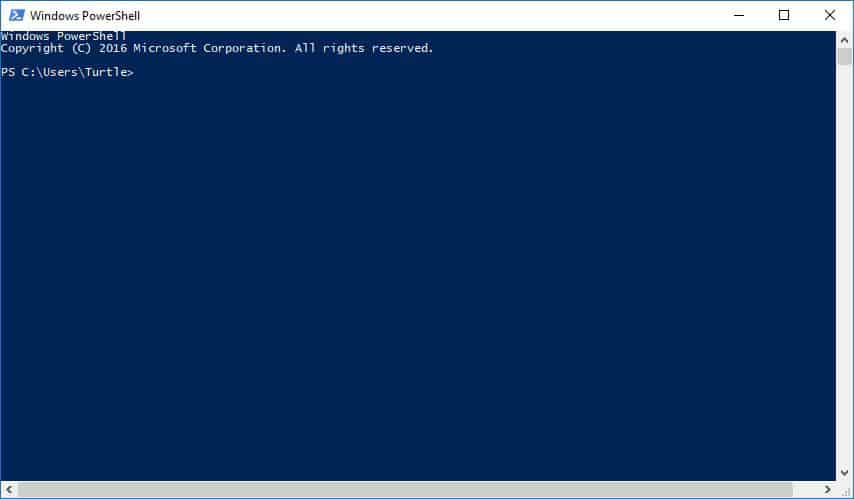 PowerShell is a relatively new terminal command access developed by Microsoft. It was originally designed for their server versions of Windows, but now it lives on every system powered by Windows 10 today. While it will execute almost all of the original Command Prompt commands you are familiar with, it really can do much more than that.

In fact, it’s really designed for more advanced users who need to do things like edit the registry. PowerShell uses something called “cmdlets,” that are similar to regular commands. These can be piped into other cmdlets giving you the ability to not only execute commands, but also create scripts that can be quite complicated and powerful.

Which Should You Use?

Don’t worry, I’m almost ready to show you how to return the Command Prompt to your menu, but first, which one should you use? If you are a more advanced user, such as IT administrator, then you may want to live in PowerShell. Sure, you can execute all the commands you needed from the Command Prompt, but you can also do so much more.

On the other hand, if you are a more basic user who only needs occasional access to a command-line interface, then you may want to stick with the Command Prompt. That way you don’t accidentally mess something up on your system. But, if you want to learn something new, which is an option I always recommend, the why not give PowerShell a try? Just be careful when you are typing in commands.

Of course, you could always use both, if you prefer. That way you can keep the simpler commands inside the Command Prompt while reserving the more complicated commands and scripts for PowerShell.

Restoring the Command Prompt to the Menu

Now that we have gotten all of that out of the way, it’s time to look at how you restore it back to your Windows 10 Power User Menu so you can access it. It’s actually pretty easy and can be done with just a few clicks of your mouse. Just follow the steps below and you will be back on your way to accessing both the PowerShell and the Command Prompt.

1. Click on your Start Menu and select the Cog for your Settings. 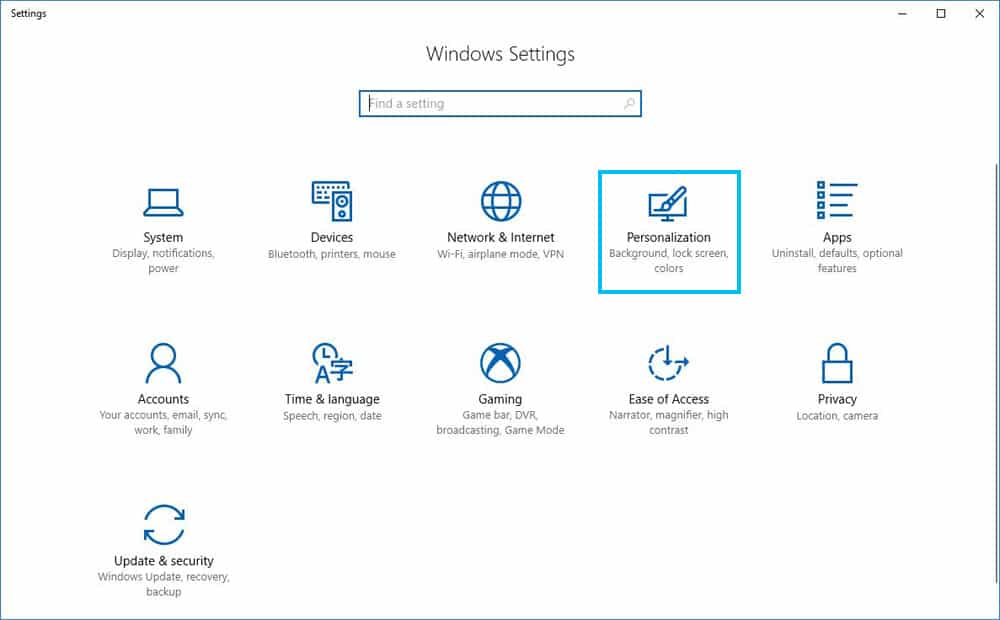 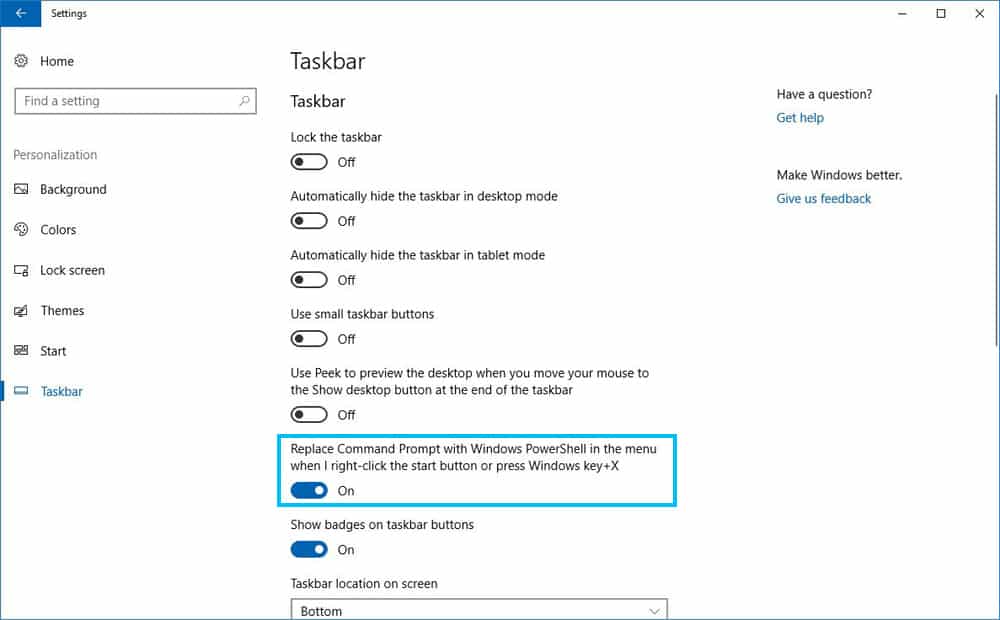 4. Turn the switch to Off on the Replace Command Prompt with Windows PowerShell option.

Once you do that, you will be able to right-click on your Start Menu and access the Command Prompt just as you did before the Creators Update. For a list of commands, I suggest you check out this chart. If you want to brush up on your PowerShell knowledge, then check out this chart from Microsoft on some of the more common PowerShell commands. Just make sure you are careful when you are playing around with any of these commands on both the Command Prompt and Windows PowerShell. You could really mess things up if you aren’t careful.

Personally, as an IT administrator, I tend to use both when I work. Maybe it’s my age. But I still enjoy pulling up the good old fashioned Command Prompt and executing a few commands. Sure, I can do the same thing in PowerShell, but it’s hard to teach an old dog new tricks. That being said, I do still use PowerShell. In fact, I’ve written quite a few scripts in my time taking advantage of the features PowerShell has to offer.

Overall, I do believe PowerShell to be superior to the old way of doing things, but I still use the old way. Maybe I should completely convert myself over to the new way of doing things. But I do enjoy the familiarity of DOS-like commands. After all, it’s where I got my start, and yes, I know that dates me.

Will Command Prompt Be Completely Removed?

While there is nothing definitive from Microsoft, I believe it’s a safe bet to assume that one day in the not so distance future you will no longer be able to access Command Prompt. When you think about it, it is based on old technology that is not as reliable or secure as PowerShell. You also need to realize that while PowerShell may be ten years old now, it’s still far ahead of the Command Prompt and is the scripting and command line interface that is currently under development at Microsoft, and it was always designed to replace the Command Prompt.

I believe you can pretty much count on the Command Prompt going away sometime soon. While it may take an update or three before Microsoft does it, it may be time to brush up on your PowerShell knowledge so you are ready when the day comes that Microsoft finally wipes away anything that remains of those good old DOS days that many of us remember fondly.

The Command Prompt is powerful, but it’s nothing compared to PowerShell. Still, it has proven to be very popular over the years. While it may have shocked many of you when it vanished from your menu, you can still get it back and use it again, if that is your desire. However, I wouldn’t count on that feature being around forever. Who knows, Microsoft may drop it completely in the next update or two. We will just have to wait and see what they decide to do. Just don’t count on it being around forever.

Which one do you prefer using when you need to execute commands in a command line interface? Do you stick with the classic Command Prompt or do you gravitate to PowerShell these days. Tell me about your usage in the comments below. Let’s see if we can figure out how much these two apps are used today. If you never use any of them and don’t even know what I’m talking about, sound off as well. I am curious to find out how many of you out there use these more advanced features.