GameMaker Studio 2, the popular 2D game creation software developed by YoYo Games, was finally released for Mac this week. The game creation tool was originally launched for PC but with this release officially becomes cross platform. The GameMaker suite of software has already been downloaded over 10 million times and currently has 200,000 active users, according to YoYo Games.

GameMaker Studio 2 for the PC was launched back in March, and many Mac owners have been waiting patiently for this release. Since the initial release, the developers were hard at work bringing this tool to the Mac platform.

“We worked tirelessly to ensure GameMaker Studio 2’s Mac debut would coincide with the needs of game developers that prefer to use platforms outside of Windows and home consoles,” said James Cox, general manager, YoYo Games. “After months carefully considering the feedback we received from beta testing and direct community outreach, we’re confident that developers who prefer Mac can now feasibly create games on the often-ignored platform. We’re always looking for ways to expand game creation to as many developers as possible, and we know Mac users will make some stand-out games with these resources.” 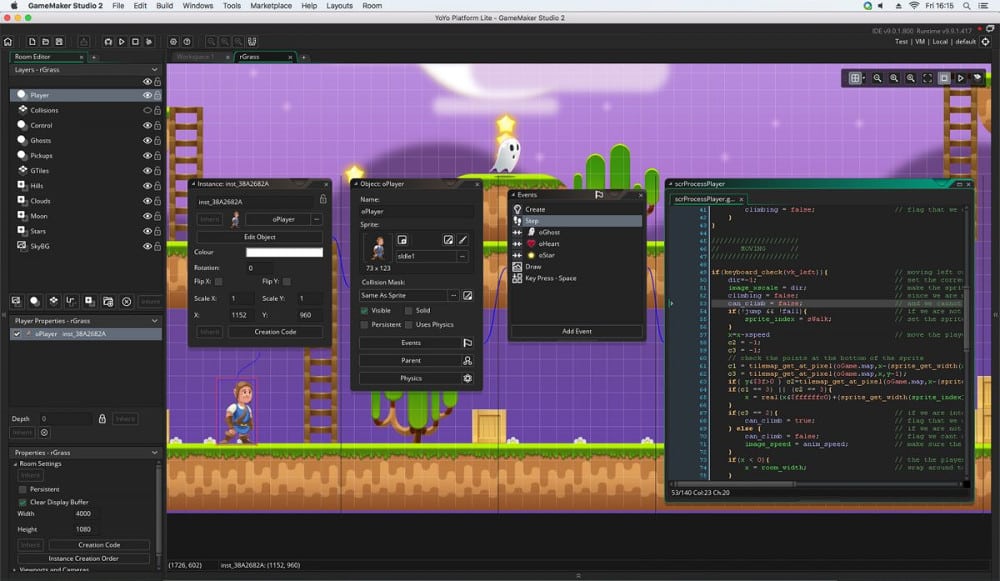 The new development environment, known on the Mac as the Mac Integrated Development Environment, or IDE, includes many new features, such as: an object editor for structuring workflow, a tabbed script editor, drag and drop features to create your games without coding, and huge libraries of events and actions. There is even support for the industry standard Box2D physics engine and Google’s LiquidFun particle physics engine.

While these features are great, this software does come with quite a huge learning curve. Despite the complicated nature of this software, James Cox, general manager for YoYo Games, states that this software is for developers of all skill levels.

“GameMaker Studio is a 2D game design platform, but what makes it different is its breadth of application. The drag and drop design features provide beginners with a way into game design without having to become coders first, so the passion that got them into game design isn’t extinguished under a mountain of programming learning; that can come later. The drag and drop approach, creates real code that gives granular control, in our C based GameMaker Language (GML), to more experienced developers. For more established Indies and Studios, our workflow is what sets up apart. It’s really quick to get results with GameMaker, as we remove the repetition, and they can turn their games into amazing audio-visual experiences with our advanced graphic design and sound-mixing functionality.”

GameMaker Studio 2 can be purchased for $100 and is available for Windows, Ubuntu Linux, and now, Mac. Visit the YoYou Games website today and pick up your copy.

While this may be a complicated piece of software, it’s always nice to see Apple products get a litting gaming love. After all, the platform is often forgot about by most developers. If you have ever wanted to create your own 2D game, now is your chance. You can design and create amazing games with this new software. So what are you waiting for?

Make the most of some amazing holiday discounts on laptops and laptop accessories this 2021.